Home
accessories
One Charger for All Your Needs: We Review the Ugreen Nexode 200W Charger

Most of us carry several battery-powered devices with us at all times now. This can make it hard to keep track of all the cables and cause problems if you forget to bring the right power adapter.

Because of this, the Ugreen Nexode 200W charger is a great accessory for many creatives. It has four USB-C ports and two USB-A ports, supports a variety of fast charging protocols, and puts out an impressive 200 watts. In this review, we look closely at the device.
If you’re like me, you probably have a few battery-powered devices that need to be charged regularly. I need to charge my Apple Watch, iPhone, iPad, laptop, headphones, and portable air purifier and fan, which I use for teaching, on a regular basis. 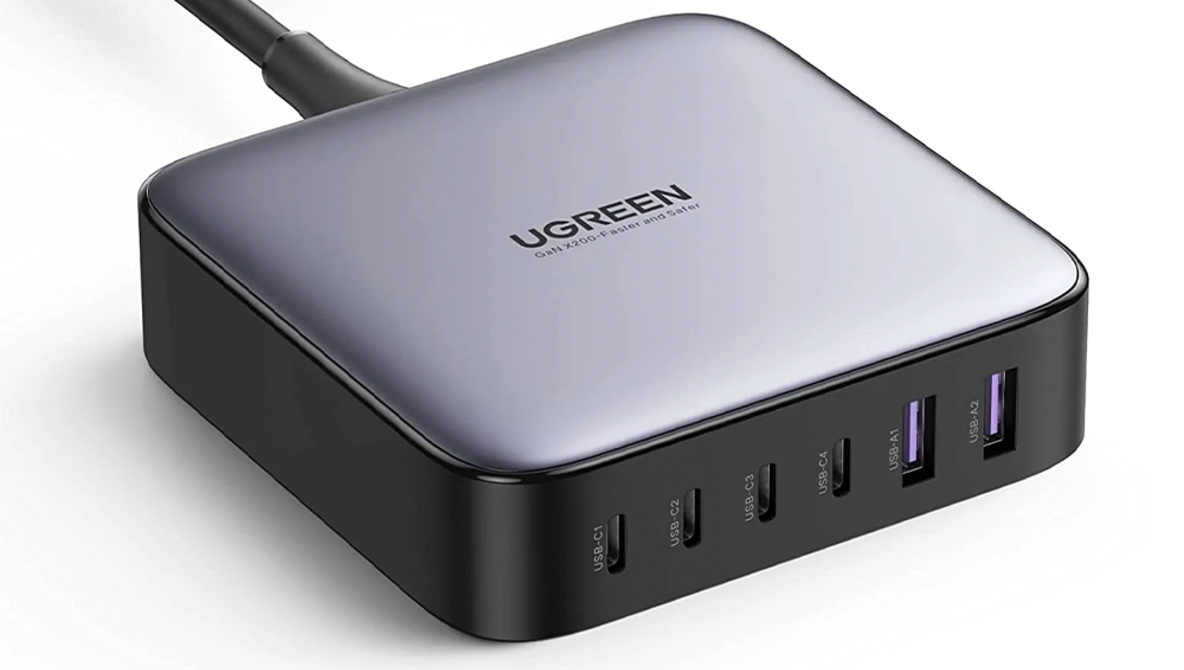 And, of course, I need to charge all the batteries in my many cameras. I have a portable white noise machine that I use to sleep on the road.

At home, I have video game controllers that have to be charged once a week. I need to charge some power banks. I have a Bluetooth speaker that I use at home and at work. I’m sure I’m forgetting something, but you get the idea: I live in a sea of batteries and cables.

On the one hand, I love that most big devices now have batteries that last a long time and are easy to charge. It means I can just get up and go, and wherever I go, I can work and have fun.

On the other hand, it’s really hard to keep track of all the power bricks and cables. There are a lot more standards now than there were ten years ago.

Most devices use a Lightning connector, USB-C, Micro-USB, or Mini-USB, though the latter two are usually being replaced by the former. This means that most of the time, you can just grab a few of the right cables and not worry too much about options that are specific to the device. 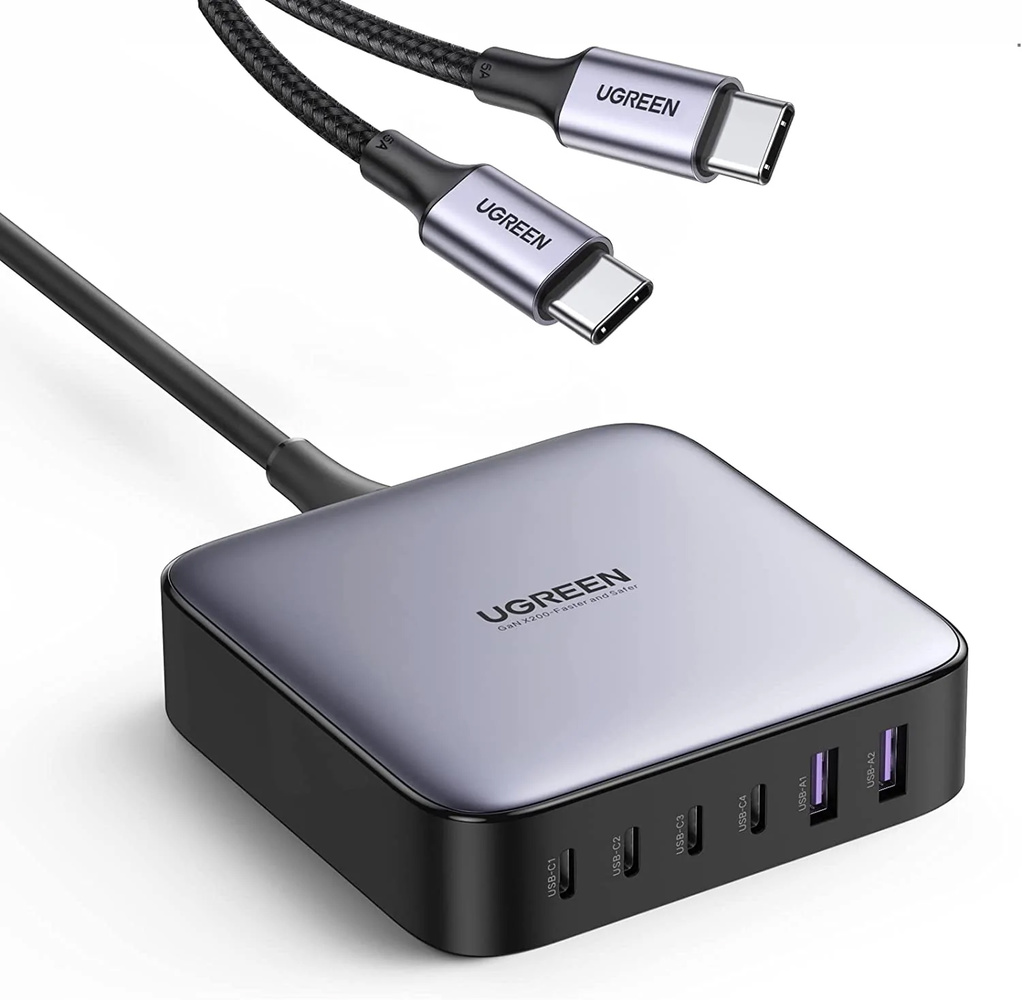 Is from the other hand, you do need to be aware of the impact adapters you bring.

Even though the days of the proprietary connector are mostly over, it’s more complicated than just making sure you have the right USB slots. Different devices need different wattages for the most efficient charging rate, and many manufacturers have added different fast-charging protocols that can be very helpful when you need to top off quickly, but these usually only work with the right charging station.

If you only bring the little 5-watt cube that came with your phone, you might be able to fully begin charging a tablet overnight, but don’t even think about charging a laptop or trying to keep multiple devices charged at the same time. Bringing along and keeping track of all the right chargers can be hard and inconvenient, which is why the Ugreen Nexode 200W device is so convenient. 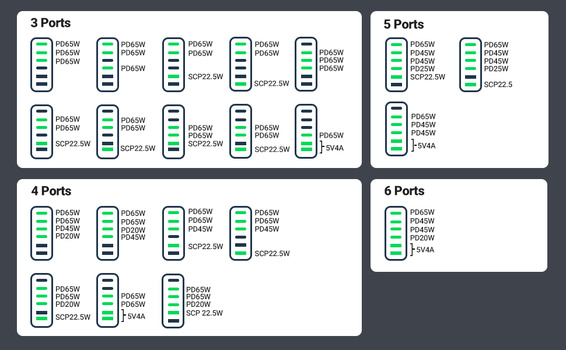 It looks great, with a polished silver finish and a black finish. I especially liked that the company’s name is tasteful and not flashy. It goes well with the rest of the design and looks good in almost any room.

On the bottom, there is a pad that won’t let the device move. The device is pretty heavy at over a pound, but I think that’s a good thing.

Too many of my USB hubs are thin and made of plastic. When a cable pulls on them, they move around and look messy. When you put the Nexode down, it stays there, even if you have a lot of cables pulling on it. It also looks good.

Easy to set up: just plug it in and let it charge. The plug end is a normal three-prong plug, so the device only takes up one outlet space and won’t get in the way of others.

I think it’s a good balance to have four USB-C ports and two USB-A ports. USB-C is slowly taking over in the tech world, but many of us still have a lot of USB-A cables lying around.

I took the charger to a wedding in a different state, but I left my other power bricks at home. This meant that it was either powering or charging:

At any given time, I was using a variety of protocols to pull about 100 watts from the charger. The charger worked perfectly.

It not only charged all of my devices, but it did so at the fastest speed allowed by their protocols. This is important to me because I often have to give my devices a lot of power in a short amount of time. 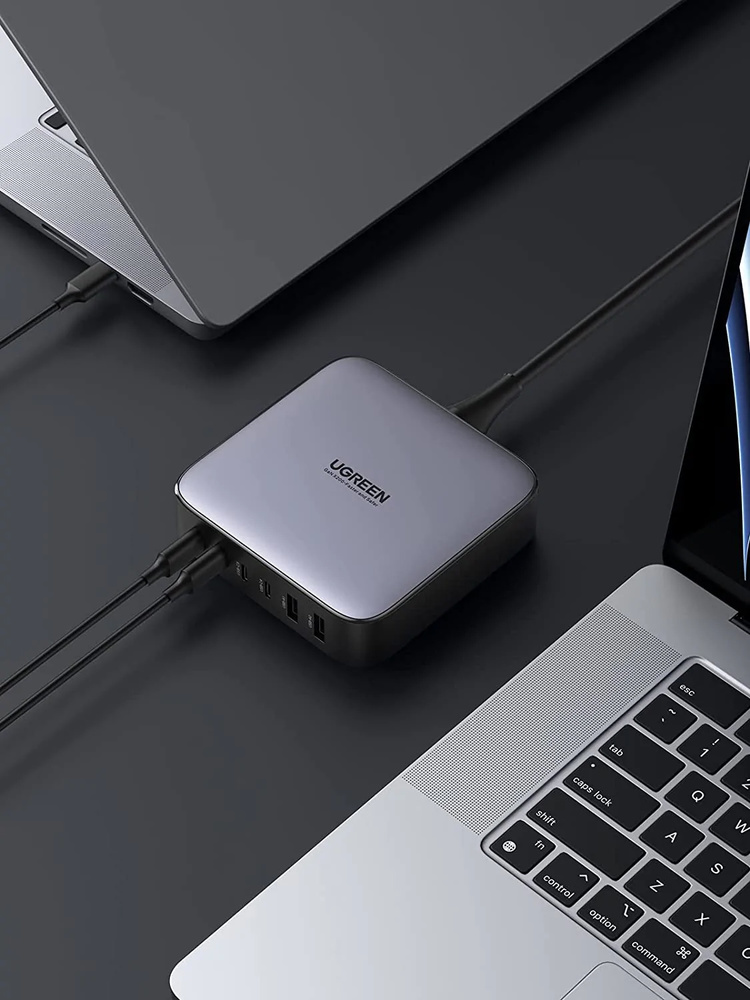 To get a little more out of it, I switched the headphones for a camera charger that uses 60 watts and the air purifier for a second iPad that uses 30 watts. All of this added up to 153.5 watts. Again, the charger gave the right amount of power when it was needed.

It seemed like I couldn’t use a combination of devices that would confuse it. It worked well with everything and was much easier than having to switch out a lot of different power bricks in multiple outlets, especially since I was traveling.

If you have a laptop that charges with USB-C, these two 100-watt ports are especially helpful. They can charge a 16-inch MacBook Pro in 1.5 hours.

Even when the device was using almost all of its power, it never got too hot. The only thing I would change is to put labels on each port showing how much power it can supply.

This would make it easier to remember which ports to use for which devices.